About the aspect: Dimensions matter

It looks miraculous how easily some scientists show how ocean temperatures behave.  But can it be taken seriously, if considering the vastness of the ocean, its low mean temperature (merely + 4°C), and its overriding impact on the global weather/climate system? Any research on global warming that pays nil attention to the possible impact of human activities at sea, and below the sea surface, should be received with great reservations. 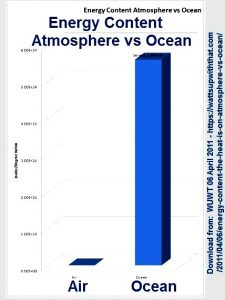 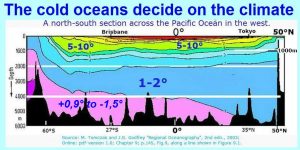 Any research regarding the network of more than 3,800 robotic floats sufficient to calculate past and future overall ocean temperature trends since industrialization is very close to manipulation, but far away from understanding ocean matters.

more serious, whereby “Ocean warming dominates the total energy change inventory, accounting for roughly 93% on average from 1971 to 2010 (high confidence)”, while concluding that the “Warming of the atmosphere makes up the remaining 1%.”

An article published last year in the journal Nature, describes a way to measure the average temperature of the ocean and to reconstruct past ocean temperatures. The abstract outlines that

One of the authors, geoscientist Jeff Severinghaus, claims according a summary by the University of California – San Diego:

“Our precision is about 0.2 ºC (0.4 ºF) now, and the warming of the past 50 years is only about 0.1 ºC,” he said, adding that advanced equipment can provide more precise measurements, allowing scientists to use this technique to track the current warming trend in the world’s oceans. Up to this point, the best estimates have come from the Argo program, a network of more than 3,800 robotic floats distributed around the world’s oceans that measures temperature and other properties and reports the data via satellite”

One can only wonder how little ‘feeling’ some scientists have about the aspect: Dimensions matter. Consider the following: 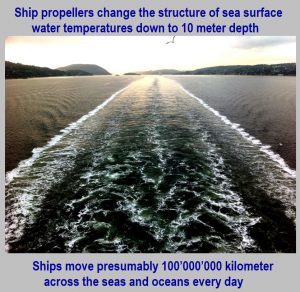 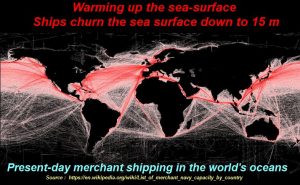 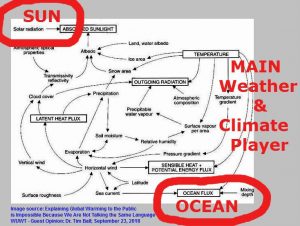 It seems very far-fetched referring under such circumstances to ‘natural variability’. If for example, Indrani Roy of the University of Exeter, (28.Sept.2918) to consider merely segregating the role of natural factors (the sun and volcano) to that from CO2 led linear anthropogenic contributions, than the discussion goes without any regard to proportion. The ocean matters most.