Who would oppose when every scientific effort is made to help contain a pandemic? Not even if he comes from the American Geophysical Union (AGU). A few days ago she presented the article by A. f. More et al. in the network, which reads:

The issues addressed are clearly recognizable: a) a significant climate change during the First World War and b) a pandemic called the “Spanish Flue”.  As key-points are named: 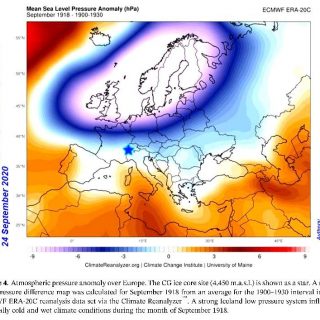 Obviously, the authors (in total eight) attempt to link a five-year climate change and a pandemic with “tens of millions of victims “.  Whether that is scientifically well founded and makes sense, and is helpful to for a better understanding of the current COROA 19 pandemic is solely their responsibility. On the other hand the aspect, what happened to the weather during the six war years, raises our interest greatly.

The essays highlight a climate anomaly from 1914 -1918, but fails to explain it.

Rarely, if ever, has a scientific essay in a climate change matter been fixed to a precise time period of six years, by saying:  Here we present a new, high resolution climate proxy record from the high Alpine Monte Rosa (4,450 m a.m.s.l.) Colle Gnifetti (CG) glacier in the heart of Europe, indicating abnormally high influxes of North Atlantic marine air in the years 1914–1919.

This statement is a very decisive statement, because it forces war activities and weather extremes to be brought into context and analyzed. Did 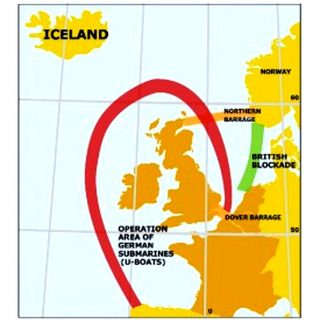 one condition the other? But the paper is completely silent on any consideration, what may have caused the great weather anomalies during the very limited time period from 1914 to 1918,  mentioning merely in very broad terms: “The environmental and especially climatic conditions in which the pandemic developed have received less attention in the scientific literature, even though historical accounts universally describe abnormally high precipitation and cold temperatures”, or by  references to a few subsequent observations for example: During the battles of Verdun (1916–1917), the Somme (1916), the Chemin‐des‐Dames (1917), and the Third Battle of Ypres‐Passchendaele (1917) (Barbante et al., 2004; Hussey, 1997).”

The collection of meteorological data was by far not less during the war, and sufficient enough to do a much more in-depth research. The lack of ability and willingness is presumably strongest correlated to the inability of climatologist to ask and investigate the role of naval war activities from 1914 to 1918 on individual weather conditions in particular, and ‘unmatched climate anomaly’ in Europe from 1914 to 1918. That even short-term naval activities of one or few days have an impact on weather is analyzed in the following two papers:

Unexpected fog and mist at the Battle of Jutland, May 31st, 1916

After D-Day a heavy summer storm, unnoticed and unexplained for 75 years

The naval war in WWI lasted not only days but more than half a decade. That a leading scientific society, consisting of over 62,000 members 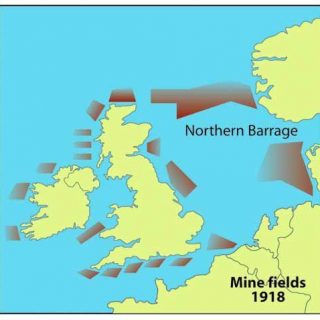 from 144 countries (Wikipedia ), and founded in 1919, intended to promote geophysics, has missed to understand, that “oceans make climate”, and warfare shaped the weather across the war areas and beyond during WWI and thereafter (see references at text end), is a hard to understand this failure.

Naval warfare caused the climate anomaly from 1914 -1918, but science ignores it.

Half decade warfare tells uncountable stories. Naval war either, but the question on the impact is confined to human activities over and in the sea, and the causes on the weather and climate. “Water is the driving force of all nature”, Leonardo da Vinci (1452-1519) told the world long ago. And in the world of geophysics all sea water exceeds the water in the atmosphere in a ratio of 1000: 1. The effect of a naval war in action requires a great deal of very detailed investigations. There is none for that. Neither in correlation to the 1st World War, nor concerning the more dramatic naval warfare during WWII in the period from 1939 to 1945. But there are numerous weather phenomena that are very likely to be associated with war at sea. Science has so far shown itself neither capable nor willing to recognize and intensively investigate this.

Here after are shown a few examples from WWI :

The few examples combined with observations during WWII can be regarded a conclusive evidence between war activities at sea and exceptional weather conditions. Both World Wars offer many more. It is high time to discuss climatic changer matters in the light of these two brief periods, as discussed in two books in detail:

AGU and any of their authors as: A. f. More et al., have to realize that WWI & WWII have a lot to offer to understand better how weather and climate works, and that it is irresponsible to ignore human activities at sea, whether in time of peace or war.