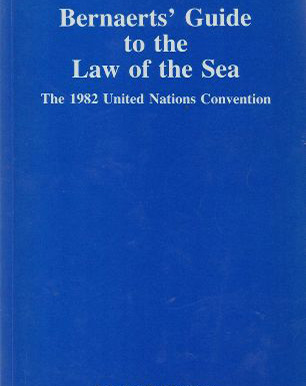 Bernaerts’ Guide to the Law of the Sea
The 1982 United Nations Convention.
Fairplay Publication 1988, Coulsdon UK

Revolutionary changes have taken place in the International Law of the Sea since 1945. The process of change was accelerated in the last two decades by the convening in 1973 of the Third United Nations Conference on the Law of the Sea. The protracted negotiations, spanning over a decade, culminated in the adoption of the United Nations Convention on the Law of the Sea in 1982. By 9 December 1984, the closing date for signature, 159 signatures were appended to the Convention, the largest number for any such multilateral instrument in the history of international relations.

The Convention, which was adopted as a comprehensive package, introduced a new equity in the relationship among states with respect to the uses of the ocean and the allocation of its resources. It deals, inter alia, with sovereignty and jurisdiction of states, navigation and marine transport, over flight of aircraft, marine pollution, marine scientific research, marine technology, conservation and exploitation of marine living resources, the development and-exploitation of marine non-living resources in national and international areas, and unique provisions dealing with the settlement of disputes concerning the interpretation and application of the new regime.

There is no doubt that as we approach the 21st century, more and more attention will be paid to the uses of the oceans and the development of their resources. It is important, therefore, that these developments should take place within a widely accepted legal framework so that there is certainty as to the rights and obligations of all states. The United Nations Convention on the Law of the Sea provides that framework. It establishes a standard for the conduct of states in maritime matters. It is thus a major instrument for preventing conflicts among states.

The convention and its annexes contain over 400 articles. For many it may be a formidable undertaking to grasp the substance and structure of it without making a considerable investment in time and energy. Mr Bernaerts’ guide, therefore, is a welcome addition to the growing body of literature on the convention. It provides a most useful reference tool which will benefit administrators and policy makers, as well as scholars. It makes the convention accessible to the uninitiated and refreshes, at a glance, the memories of the initiated. With meticulous references and graphic presentations of the provisions of the convention, Mr Bernaerts has given to the international community an invaluable guide to the understanding and implementation of the 1982 United Nations Convention on the Law of the Sea.

The reader will be aware that the 1982 United Nations Convention on the Law of the Sea is the first constitution of the oceans, a groundbreaking document in many respects. He or she might also have made the discovery that the full text of the Convention is immediately accessible only to experts. If the Convention were only a treaty consisting of straightforward technical regulatory provisions, it could be left to them with a clear conscience. But the Convention is to a large extent a political document and, as such, is expected to influence significantly the development of relations among the states in the world community; for this reason, a wide-spread knowledge of the scope, goals, and regulatory framework of the Convention can only serve to further the aims of the document and would surely follow the intentions of the many men and women who made this Convention their life-work, such as Arvid Pardo (Malta), Hamilton Shirtey Amerasinghe (Sri Lanka), Tommy T. B. Koh (Singapore), and Satya N. Nandan (Fiji), to name only a few of the hundreds who worked on the preparation of this Convention

As the reader uses the Guide (Part II), he will find that many provisions of the Convention are much easier to understand if one knows the basic framework within which a particular regulation is placed. The Guide aims to provide this framework, with reference to the text of the Convention and, in addition, to the supporting Commentary of Part III, which describes the overall context of the major terms and concepts. The Introduction of Part I sketches the historical background of the Convention and some of the general effects. A detailed index at the end of the book will be of assistance in finding specific subjects.

Preface of the reprint in 2005

More than 15 years ago FAIRPLAY PUBLICATIONS Ltd, Coulsdon, Surrey, England, published the book “Bernaerts’ Guide to the Law of the Sea – The 1982 United Nations Convention”. The guiding potential of the book to find access to the 1982 Law of the Sea Convention is still given. Internet technology and publishing on demand invite to provide the interested reader, law student, and researcher with this tool again. Only the Status of the Convention (ratification etc) has been updated and instead of the Final Act, the reprint includes the “Agreement relating to the Implementation of Part XI of the United Nations Convention of the Law of the Sea” of 1994. The thorough Index of the 1988 edition is reproduced without changes.