“that El Niño contributes only six percent to California’s precipitation variability and is one factor among other, more random effects that influence how much rainfall the state receives

. While it’s more likely El Niño increases precipitation in California, it’s still possible it will have no, or even a drying, effect.”

What a helpless science. Why? They have not investigated what they should have done a long time ago.

Since summer 1939 a strong El Niño was active off South America’s coast. Few weeks later there was war in Mongolia and 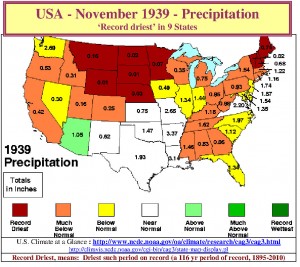 , 25th September) and record rain. It was the heaviest September rain in Los Angeles’ weather history and it broke the worst heat wave in Weather Bureau records, as measured by intensity and duration. It lasted for eight days. (NYT, 26 September). While Western Europe experienced an extreme rainy autumn, the USA ‘fell dry’ after receiving

only a small percentage of normal precipitation: in October 78%, in November 44% and in December 71%. According to US Weather Bureau the fall season was extremely dry over large areas. (NYT, 07 January.1940). [for more see page 34ff at: http://www.1ocean-1climate.com/book.pdf ]

If NASA experts would have paid more attention on the extremes mentioned and shown in the US maps for two months in 1939, they may have been able to offer better forecasts concerning El Niño and its impact elsewhere.