Thrown suddenly in the climatic boondocks – While meteorology is looking away

The previous post was about „What is a winter in Europe?” Towards the end of January 1940, also the United Kingdom was severely affected. It came suddenly, unexpected, and without any precedence since industrialization. Anthropogenic abilities to interfere in the natural heights with the start of the Second World War (WWII). Suddenly, the weather in Europe runs amok. Eight decades later science has failed to explain to the general public what was all  about, and whether a link to the huge military activities can be excluded for sure. How can anyone claim to understand climatic changes, if incapable to understand and explain one of the most pronounced and sudden winter weather shifts in some regions during the last 150 to 200 years, which occurred without an ‘obvious’ reason (e.g. earthquake, volcano). Therefore the European weather drama in January 1940 should serve as a reminder that climatologists behaves irresponsible as long as they ignore this drama. Towards the end of January 1940, also the United Kingdom faced the worst possible weather conditions possible, here is a brief account

Ice storms are rare in the UK, but the worst incident was in January 1940, during the Second World War. It was the coldest winter for a century when, on January 27, a savage ice storm swept much of southern Britain. The landscape seemed to be encased in glass, trees looked like frozen waterfalls, and the ice weighed them down until they broke and smashed ground. (pay-wall:The Times, 2007)

January 1940 was a severe wintry month with frequent frosts and heavy snowfalls. The CET for the month was -1.4C, the first sub zero CET month of the 20th Century and the coldest month since February 1895.

On the night of the 23rd, a minimum of -23.3C was recorded at Rhaydaer (Powys) a record low for that date. Other lows include -20C at Canterbury, Welshpool, Hereford and Newport in Shropshire. 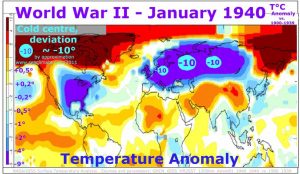 The Thames was frozen for 8 miles between Teddington and Sunbury and ice covered stretches of the Mersey, Humber and Severn.

The sea frozed at Bognor Regis and Folkestone and Southampton harbors were iced over. The Grand Union Canal was completely frozen over between Birmingham and London. Central London was below freezing for a week and there was skating on the Serpentine on 6″ ice.
However, January 1940 will always be remembered for the Snowstorm and ice-storm that struck the UK.  (Credit: http://www.theweatheroutlook.com)

On the 26th, two occlusions were moving up from the SW engaged the cold air over the UK. At the same time, the anticyclone over Scandinavia was intensifying blocking the fronts from pushing through the UK, they became stationary over Wales and SW England. This resulted in a great snowstorm across many northern and eastern areas.
Vast areas of northern England reported between 30-60cm of level snow, the higher parts in excess of 60cm+. The snow drifted in the strong Sely wind even in the Centre of London. Other reports of snow depths include Eastbourne:- 25cm, Pontefract:- 37cm, Malvern:- 60cm and Exmoor: – drifts of 2.5m. The snowfall

On the low ground in the south, the precipitation fell as freezing rain. The raindrops were of the super cooled nature, so when the rain hit the surface, it would freeze instantly. This is a rare event in the UK and the 1940 is reckoned to be the severest that has struck the UK in recorded history.
The duration of the storm was remarkable lasting up to 48 hours in places. For instance at Cirencester, 48 hrs of freezing rain fell in

temperatures of between -2 and -4C. The effect of this prolonged ice storm was severe and damaging. Many telegraph poles and wires were snapped, unable to cope with the weight of the ice.

fauna suffered as well, many tree branches were snapped off by the enormous weight of ice, birds were unable to fly because ice accumulated on their wings. Travel was next to impossible as roads and pavements became skating rinks. Any sloped surface was impossible to climb. (Credit: http://www.theweatheroutlook.com)