The time may end soon eventually that the sun is responsible for significant climatic changes, as new research indicates: 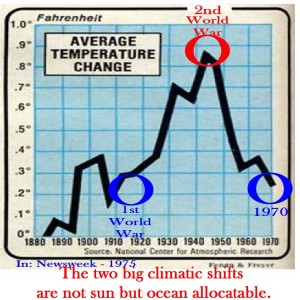 “The apparent upward trend of solar activity between the 18th century and the late 20th century has now been identified as a major calibration error in the Group Sunspot Number. Now that this error has been corrected, solar activity appears to have remained relatively stable since the 1700s.”

It is time to put the sun in second or third position. There is no evidence that varying sun-ray has ever caused a significant and abrupt climatic change in many million years. Changing sun-ray will influence sea surface temperature accordingly, which show up in statistics, but that does not cause climatic changes. The control button is in the hand of the driver of climate, the ocean. The sun is insignificant in the global warming 1920-1940, and the global cooling 1940-1970, the oceans not.