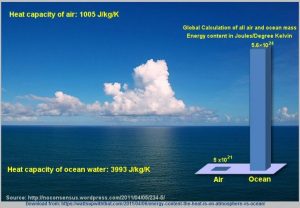 Climate models are junk, if not primarily based on data from the ocean

The greatest scientist of the last century, H.H. Lamb (1913-1997), felt that modeling was too uncritically. One reason was presumably that he started to make the first connections between sea-surface temperatures and the atmospheric circulation (The Independent, 1997).

He was also the one who observed in 1969 that “Only thirty years ago climatology was generally regarded as the mere dry-as-dust bookkeeping end of meteorology (NATURE). It seems little has changed during the last 50 years. Actually it got much worst.

Science used to define climate as ‘average weather over a period of 30 years versus the period from 1901 to 1930, but consider the term climate now “as the statistical description in terms of the mean and variability of relevant quantities over a period of time ranging from months to thousands or millions of years.” (DETAILS HERE) This is poor science and makes climate science a joke. Even the most incomplete definition would require that the impact of the ocean be greatly emphasized (see the Fig. 1 & 2).

“If you wish to converse with me, define your terms.”

Recently Tim Ball used this quote out of his observation that  “Explaining Global Warming to the Public is Impossible Because We Are Not Talking the Same Language” (WUWT, 23 Sept.2018) Although he touches the problem frequently (e.g. WUWT, 28 May 2018)

he misses the crucial point to understand climate change and what human kind is contributing – the role of the oceans.

It is not too difficult to imagine why H.H. Lamb felt that climate modeling was too uncritically, as he was serious on the connections between sea-surface temperatures and the atmospheric circulation. By the time Lamb would have realized that ‘global climate’ [regardless of a definition] depends on the status of the sea –from top to bottom – to 95%+! But climatology works to 95%+ with data from the atmosphere, respectively ‘weather data’. Why is Tim Ball wondering that climate skeptics and mainstream climatology are not talking the same language, although both fail grossly when it comes to the ocean? The main division comes from believing in or being skeptical of climate models. Those produce scrap if not fed with ocean data, which at best exist only randomly.  Sceptics fail to make this their main argument.

Even the former director of the Royal Dutch Meteorological Institute, Henry Tennekes, takes a too narrow view (from: A Climate of Stage Angst) :

Climate models are quasi-deterministic and have to simulate daily circulation patterns for tens of years on end before average values can be found. The much more challenging problem of producing a theory of climate forecast skill is left by the wayside.

The horrible predictability problems of turbulent flows then will descend on climate science with a vengeance.

Indeed it will not work if the focus is not the ocean. For climate models one need primarily ocean data. Tennekes himself was hardly aware what that actually means, when he wrote the essay: “Karl Popper and the accountability of numerical Weather forecasting” (in: Weather, Vol. 47, p.342-6, 1992):

What happened when World War II commenced on 1st September 1939. A global cooling
started from winter 19391940 lasting to the mid-1970s.
Why?
If the reason was the war at sea it would prove that man can
change climate in a short period of time of few months or years! 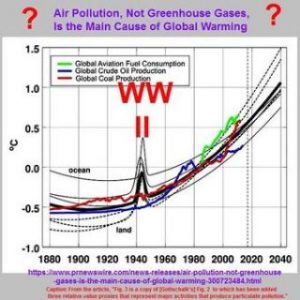