It is hard to believe! The experts from the department of meteorology have never taken into account the fact that a major war can change the weather pattern. To highlight the failure, the following consideration focuses on the opinion of ten experts concerning the reasons for the extreme war winters of 1939/40, 1940/41 and 1941/42. Seven of these experts were contemporary witnesses, the other three were born much later. One could assume that the list of a few witnesses is selective, but surprisingly enough it is not. Whether named or not[1], not anyone has said anything about the relevance of human activities in this matter. A link between war and weather was never investigated; in either naval war.

Although all recognised that these winters had been extremely exceptional, not even one of them raised the most obvious question, namely this one concerning the role war had on the weather. How can science work with such a big lack of curiosity? How can climatology claim that they understand ‘climatic changes’ if they do not even know the reason why weather and climate deviated at the onset of WWII. It happened under the eyes of modern science. The following presentation of views provides a fairly comprehensive picture of the negligence of science in the “war changed weather” issue. WWII ended 65 ago and science has no idea of what the war did to the weather. This is unacceptable. 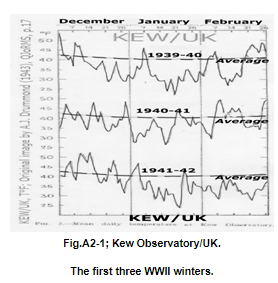 If we were to choose a sentence that was published and that alone should have forced legions of scientists into motion and kept them busy until they had convincingly established the reasons and conditions of why it had happened, we could choose this one:

“The present century has been marked by such a widespread tendency towards mild winters that the ‘old-fashioned winters’, of which one had heard so much, seemed to have gone for ever. The sudden arrival at the end of 1939 of what was to be the beginning of a series of cold winters was therefore all the more surprising. Never since the winters of 1878/79, 1879/80 and 1880/81 have there been three in succession so severe as those of 1939/40, 1940/41 and 1941/42.”

What in the world prevented Drummond to link his observation to naval warfare? Also his colleagues were and still are silent, although his essay offers many more interesting observations, which Sir George Simpson made comments on the same issue (1943, Discussion, p.147f):

“I feel this paper is a unique source of information for future climatologists and I am certain that for every hour Mr. Drummond spent on his work other people will spend a great many more in making use of his data.”

The honorable Sir George Simpson would turn in his grave if he knew how much he had miscalculated. Not one of the “future climatologists” has made use of Drummond’s observation. So it up to this work to present at least the most important observations in the following chapters. 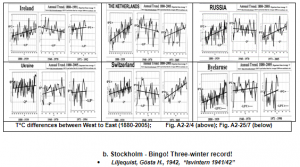 The Swedish author Liljequist was one of the few who analysed the early three extreme winters in WWII. He was certainly not the only one who recognized the unusual nature of the three cold winters in a row. According to his studies such a situation had never been seen before. In the Swedish Ice report of 1941/42, he wrote:

“After the two severe winters 1939/40 and 1940/41 and the difficulties for seafaring activities and the fuel supplies in the country, they had probably been waiting and hoping that the winter of 1941-42 would be a recurrence of a prior mild winter. Instead, this winter was one of the toughest, if not the toughest of all winters, in the past 200 years. ”

A few months later he published a very detailed analysis on “The severity of the winters at Stockholm 1757–1942” (Liljequist, 1943), with results any real scientist would investigate until he thoroughly understands the reasons and circumstances.

Surprisingly enough Liljequist never considered the cause of very cold winters in a row. Who else had been closer to the naval war scene in the Baltic than he? Nevertheless, his papers proved to be very helpful for my investigation. They gave some sort of support circling around the naval war thesis and encouraged me to search for convincing explanations and evidence. 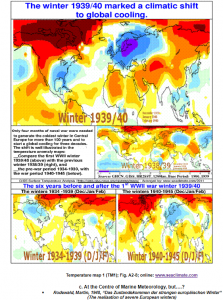 Only after WWII M. Rodewald, reflected on weather conditions during the war, some of which he had analysed as a forecaster of the German weather service SEEWARTE (Marine Weather Service) in Hamburg , and he was responsible for a number of daily weather analyses during the war months in 1939. His paper mentions that a series of cold winters occurred from 1780 to 1859 with about 4 severe winters in every decade, with only two cold winters, 1881 and 1929, during the 80 years since 1860, with the further explanation:

“Beginning in the previous century, a ‘secular heat wave’ made itself felt over most of the Earth, we noticed this especially in the increasing mildness of the winters, which became more and more striking between 1900 and 1939. So it is all the more surprising that there was a series of three severe winters in succession in 1939/40, 1940/41 and 1941/42, appearing to indicate a sudden reversal of the previous development rather than a slow deceleration, contrary to the sustainment tendency of circulation and temperature deviation.” 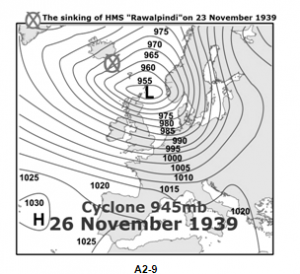 Rodewald’s synopsis clearly stresses that something extraordinary had happened, but that is all, which is worth reading, if one is looking for reasons. Although he had been at the center of the weather service in autumn 1939 he did not investigate one of the ‘weather deviations’ during the initial months of WWII, e.g. the weak cyclone activity over Europe or the shift of wind from SW to the NE sector. Another example is the 950mb low pressure cyclone over the Orkney Islands on November 26 1939. He was the responsible analyst but did not ask whether that might have had something to do with the first naval battle. On November 23rd the available Royal Navy ships in the sea area between Iceland and Scotland were deployed to hunt down two German battleships and their escorts that had sunk the auxiliary cruiser “Rawalpindi” south-east of Island in an earlier encounter. During this action the air pressure over Iceland dropped fast and a short time later wind force increased to Beaufort 12. Neither this nor any other of very numerous weather incidents Rodewald picked up for consideration of an impact of war on weather and climate. For an expert contemporary witness with a specialisation in marine meteorology that was terribly short-sighted.

This professor from Eberswalde , a small city about 40 km north-east of Berlin , assessed the winter of 1939/40 immediately, but because of his later enlistment in the navy, he could only publish his findings after the war. He mentioned the need to analyse the first war winter in conjunction with those of 1940/41, 1941/42 and 1946/47 as well, but he never did.

The paper is confined to an analysis concerning the condition of Germany and Central Europe and the special features of the winter 1939/40 that distinguishes itself from the previous cold winters, as it was the coldest winter for the region of Hanover, Berlin, Prague, Warsaw and the southern Baltic in 110 years. The severity of this winter was greater in North Germany than towards the south. The low-land south of the Baltic received the mass of cold air from the Finland-Russian region. While previous extreme winters had been particularly cold in January (1892/93) or in February (1928/29), the temperature level of the first war winter was extremely low during the whole winter, in Northern Germany having six degrees below mean (Fig. A2-10). Geiger notes that a deviation of 6°C for a month is unusual, “but for an entire winter it is monstrous”.

For R. Geiger it could not have been too difficult to realise that the location and the duration of cold had been particularly severe over the German Bight, Denmark and the Baltic, where enormous naval activities (including the training of naval crews) took place. Maybe the professor had only few opportunities to observe the weather, while serving on a submarine.

He wouldn’t be mentioned if it weren’t for two fundamental failures. One is official and on record. In my opinion, it is the fact that he did not search for the reason why his prediction failed. He was a trained scientist, with a doctorate in natural science. He was named the father of all weathermen as he was the one who developed a novel ten-day weather forecasting. He made himself known internationally with a paper on the correlation in meteorology which appeared in 1930 and with one on the significance of the stratosphere[3]. His name is Franz Baur (1887-1977).

Nevertheless, he deserves the top spot in this list of experts. Baur advised Adolf Hitler that the winter 1941/1942 would be mild. It proved a tremendous mistake. Since November 1941 the weather was the coldest for a hundred years. These conditions prevented the German army, as planned, to reach Moscow before the end of 1941. This magnificent blunder was a blessing for humanity, because it marked the beginning of the end of the Third Reich. It also shows how little meteorology understood about their discipline, at least they were entirely unable to draw possible conclusions from the two previous cold winters. Naval war had already contributed to the previous two cold winters! During autumn 1941 heavy fighting in the Baltic caused the weather to respond, but Franz Baur and his colleagues never asked why. Franz Baur in the first place, should have been most ambitious to find out why his forecast failed so colossally, as a devoted scientist would have done. But he did not and failed a second time.