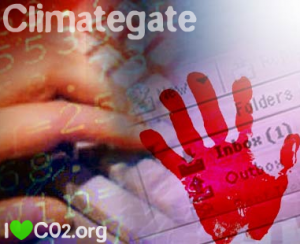 Was there a scientific scandal in climate change matters almost one dozen years ago? “Climategate” began in November 2009 with the hacking of a server at the Climatic Research Unit (CRU) at the University of East Anglia (UEA) by an external attacker, copying thousands of emails and computer files (the Climatic Research Unit documents) see: Wikipedia .  One side claimed that the hacked emails showed evidence that climate scientists manipulated data. The opposite side said that the release of emails was a smear campaign. The latter group won. The matter is off the table. The mainstream media and the Climategater scientists themselves claim complete exoneration by the various ‘inquiries, as discussed in a detailed assessment by Judith Curry (2019/Nov.12). Indeed the other side, the so called climate change denialists /sceptics, had a topic to pester science for some time, but were unsuccessful. It didn’t have to be if they had looked closely at the beginning of the process. We want to briefly explain this again below, because it consists of only four steps, as follows: 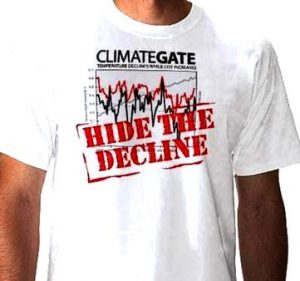 3.A publication of both letters on the Blog, posted on 13th November 2009,

4. A comment to the post, which included a links to the incriminating about more than 1,000 emails and 3,000 other documents.

The climate change denialists /sceptics may have spoiled a good chance to converse the climate change debate on a more transparent and fruitfully discussion. Meanwhile the Climategate-2009 is unlikely to emerge again. Here is now the story how it commenced: 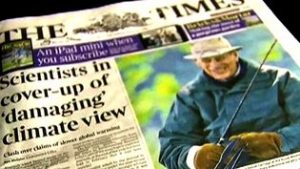 (1) An open letter reply to a letter written to government by 18 different scientific organizations
concerning climate change legislation to the US Congress.

October 21, 2009
Dear Senator:
As you consider climate change legislation, we, as leaders of scientific organizations, write to state the consensus scientific view.
Observations throughout the world make it clear that climate change is occurring, and rigorous scientific research demonstrates that the greenhouse gases emitted by human activities are the primary driver.

These conclusions are b 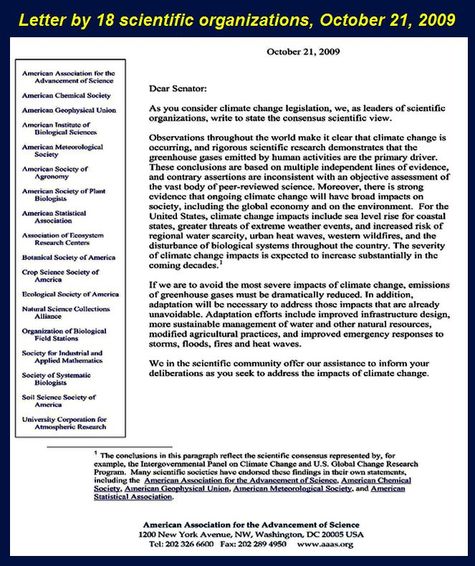 ased on multiple independent lines of evidence, and contrary assertions are inconsistent with an objective assessment of the vast body of peer-reviewed science. Moreover, there is strong evidence that ongoing climate change will have broad impacts on society, including the global economy and on the environment. For the United States, climate change impacts include sea level rise for coastal states, greater threats of extreme weather events, and increased risk of regional water scarcity, urban heat waves, western wildfires, and the disturbance of biological systems throughout the country. The severity of climate change impacts is expected to increase substantially in the coming decades (a). If we are to avoid the most severe impacts of climate change, emissions of greenhouse gases must be dramatically reduced. In addition, adaptation will be necessary to address those impacts that are already unavoidable. Adaptation efforts include improved infrastructure design, more sustainable management of water and other natural resources, modified agricultural practices, and improved emergency responses to storms, floods, fires and heat waves. We in the scientific community offer our assistance to inform your deliberations as you seek to address the impacts of climate change.

(a) The conclusions in this paragraph reflect the scientific consensus represented by, for example, the Intergovernmental Panel on Climate Change and U.S. Global Change Research Program. Many scientific societies have endorsed these findings in their own statements, including the American Association for the Advancement of Science, American Chemical Society, American Geophysical Union, American Meteorological Society, and American Statistical Association. 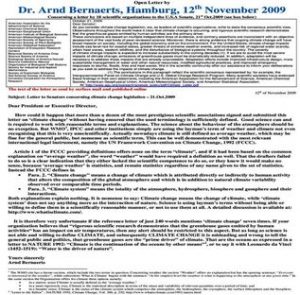 How could it happen that more than a dozen of the most prestigious scientific associations signed and submitted this letter on ‘climate change’ without having ensured that the used terminology is sufficiently defined? Good science can and is required to work with reasonable terms and explanations. The science about the behavior of the atmosphere should be no exception. But WMO1, IPCC and other institutions simply are using the layman’s term of weather and climate not even recognizing that this is very unscientifically. Actually nowadays climate is still defined as average weather, which may be fine for the general public, but nonsense as scientific term. This can be well demonstrated with the most relevant international legal instrument, namely the UN Framework Convention on Climate Change, 1992 (FCCC).

Article 1 of the FCCC providing definitions offers none on the term “climate”, and if it had been based on the common explanation on “average weather”, the word “weather” would have required a definition as well. That the drafters failed to do so is a clear indication that they either lacked the scientific competence to do so, or they knew it would make no sense, because ‘average weather’ is statistics, and remain statistics regardless of any name given to the set of statistics.

Instead the FCCC defines in

Para. 2. “Climate change” means a change of climate which is attributed directly or indirectly to human activity that alters the composition of the global atmosphere and which is in addition to natural climate variability observed over comparable time periods.

Para. 3. “Climate system” means the totality of the atmosphere, hydrosphere, biosphere and geosphere and their interactions. 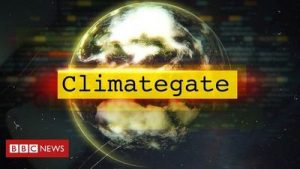 Both explanations explain nothing. It is nonsense to say: Climate change means the change of climate, while ‘climate system’ does not say anything more as the interaction of nature. Science is using layman’s terms without being able or willing to define them in a scientifically reasonable manner, or not to use them at all. A detailed discussion is available at:  http://www.whatisclimate.com/.

It is therefore very unfortunate if the reference letter of just 240 words mentions ‘climate change’ seven times. If your organization believes that “rigorous scientific research demonstrates that the greenhouse gases emitted by human activities“ has an impact on air temperatures, then any alert should be restricted to this aspect. But as long as science is not able and willing to define CLIMATE, and subsequently CLIMATE CHANGE it is misleading and wrong to tell the general public and politics, that greenhouse gases are the “prime driver” of climate. That are the oceans as expressed in a letter to NATURE 1992: “Climate is the continuation of the oceans by other means”2, or to say it with Leonardo da Vinci (1452-1519): “Water is the driver of nature”.
Yours sincerely
Arnd Bernaerts

(3)       The comment by FIOA (Freedom of Information Act) with links to documents for downloading (time restricted). 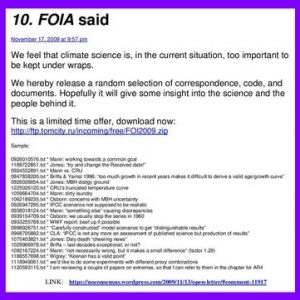 We feel that climate science is, in the current situation, too important to be kept under wraps.

We hereby release a random selection of correspondence, code, and documents. Hopefully it will give some insight into the science and the people behind it.

This is a limited time offer, download now: http://ftp.tomcity.ru/incoming/free/FOI2009.zip 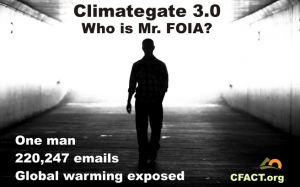 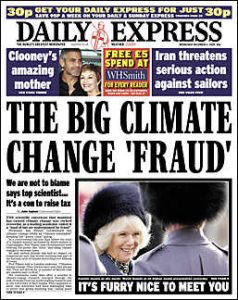 This is the biggest news ever broken here. The first thing I have to say is that I have no connection to the source of these files. It was left as a link on my blog while I was hunting for cloaked deers (fruitlessly) in the Upper Penninsula. These files are real IMO but they cannot be one hundred percent verified as such. How can we be certain but IMO, real. They were potentially scraped from multiple computers in my opinion by a hacker or an insider involved in some of the endless FOIA requests.

I’ll say this delicately – this person risked one f..k of a lot to show us this data.

I need some legal advice regarding the files received today. I’ve verified that the data seems to be true, simply due to the volume of it and knowing the issues – currently the link is offline, I took it down the minute I realized what it contained. I need to understand the legal ramifications of making some of the emails public. In the meantime, a summary of the 62 MB of data is – personal email correspondences between some of the major players Santer, Briffa, Mann, Osborne, Wahl. Data and code, the data SteveM and I will enjoy but I can’t load CA now. The code or a ver 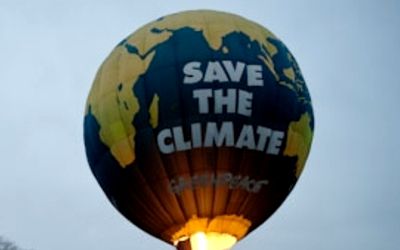 sion of it for HadCRUT was released also. The tone of the emails is quite interesting Steve McIntyre is the focus of much of them but there are quite a few references to obstruction and making things difficult for the ‘skeptics’. There are also budgetary items and grant monies- you wouldn’t believe how much money these boys play with.

There are several comments about scientists wanting to hide their environmentalist views to promote the best results. Also, some about people being happy with the death of skeptics as well as a lot of rubbish about the latest Yamal results at CA.

What I need to know is what are my legal obligations as to posting a link to this file and what is allowed to be shown from it. In the meantime I see Anthony at WUWT who has more experience than me with media has posted several emails, so in this case there is one particular letter which deserves to see the light of day because of it’s amazing nature.

One of the biggest criticisms of skeptics is non-publication. I think we can put an end to that charade here and now. If someone can find me a lawyer to let this loose I’ll add the rest of the names but let’s just say it’s our favorite ends justify the means group.

More about the history

TO: FOIA (# 10 & 19)
You did it. You made many people very, very happy with your visit here and the given link. Luckily Jeff Id discovered it immediately: “This is the biggest news ever broken here. hunter said November 20, 2009 at 12:01 am , „Thank you. Thank you. Thank you.
God bless you.“ And at : http://www.examiner.com Terry Hurlbut (Nov19; 9:42 PM) said: „Commentary on all the blogs involved has been brisk, except, oddly enough, at The Air Vent, where only seven comments have been received.“

Allow me to assume you did it intentionally with regard to the subject OPEN LETTER. That would at least make me very happy, as it would be a clear indication that there are other person out (at minimum one), which would agree with me that a science is nuisance if it is not able and willing to define in a reasonable scientific manner what it is talking about. That the talking about a definition on CLIMATE should not be taken lightly, is indicated in my previous comment. If a nonsense term is used by science it is not only misleading the simple people, but also shows that they do not understand what they are talking about. That is the real tragic of all the talking about the CO2 greenhouse gases since the James Hansen’s AGW claim before the US Senate in 1988. They stare in the air, without knowing where they are going to. OK. Currently, presumably only you, (few other ?) and I know. That should change, and your kind appearance here may have been a help, hopefully, for which you deserves my highest appreciation, and sincere thanks. 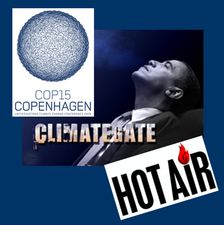