Dr. Arnd Bernaerts is again active with edifying articles on how humans impact upon the oceans and thereby the climate. His recent post is Global Cooling 1940 – 1975 explained for climate change experts

I and others first approach Dr. Bernaerts’ theory relating naval warfare to climate change with a properly skeptical observation. The ocean is so vast, covering 71% of our planet’s surface and up to 11,000 meters deep, with such storage of solar energy that it counteracts all forcing including human ones. 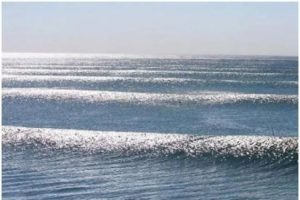 Two brief remark to the second paragraph are inevitable:

The oceans consist of a structure based on temperature and salinity. But its main feature is its overall mean temperature of only +4°C. Any external or internal forcing interferes quickly in the moving water masses. Particularly colder water from deeper layers may cool down the surface layer, which may last for a long period.

The thesis that human forcing contributed to the global cooling, can only seriously rejected if a better and more convincing causation can be shown. That is by far nowhere indicated. The naval war thesis is the most promising one to to prove that man contributed significantly.

Note: Dr. Bernaerts is not an “oceanographer”, but a trained master mariner and lawyer. 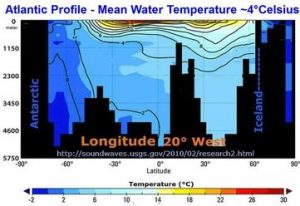 As an oceanographer, Bernaerts is well aware of that generalization, having named his website Oceans Govern Climate. But his understanding is much more particular and clearer to me in these recent presentations. His information is encyclopedic and his grasp of the details can be intimidating, but I think I get his main point. When there is intense naval warfare concentrated in a small, shallow basin like the North Sea, the disturbance of the water structure and circulation is profound. The atmosphere responds, resulting in significant regional climate effects. Nearby basins and continents are impacted and eventually it ripples out across the globe.

The North Atlantic example is explained by Bernaerts Cooling of North Sea – 1939 (2_16) Some excerpts below.

Water, among all solids and liquids, has the highest heat capacity except for liquid ammonia. If water within a water body remained stationary and did not move (which is what it does abundantly and often forcefully for a number of reasons), the uppermost water surface layer would, to a very high percentage, almost stop the transfer of any heat from a water body to the atmosphere.

However, temperature and salt are the biggest internal dynamic factors and they make the water move permanently. How much the ocean can transfer heat to the surface depends on how warm the surface water is relative to atmospheric air. Of no lesser importance is the question, as to how quickly and by what quantities cooled-down surface water is replaced by warmer water from sub-surface level. Wind, cyclones and hurricanes are atmospheric factors that quickly expose new water masses at the sea surface. Another ‘effective’ way to replace surface water is to stir the water body itself. Naval activities are doing just this.

War in the North Sea

Since the day the Second World War had started naval activities moved and turned the water in the North Sea at surface and lower levels at 5, 10, 20 or 30 metres or deeper on a scale that was possibly dozens of times higher than any comparable other external activity over a similar time period before. Presumably only World War One could be named in comparison.

The combatants arrived on the scene when the volume of heat from the sun had reached its annual peak. Impacts on temperatures and icing are listed in the last section: ‘Events’ (see below). The following circumstantial evidences help conclude with a high degree of certainty that the North Sea contributed to the arctic war winter of1939/40.

On the basis of sea surface temperature record at Helgoland Station and subsequent air temperature, developments provide strong indication that the evaporation rate was high. This is confirmed by the following impacts observed: 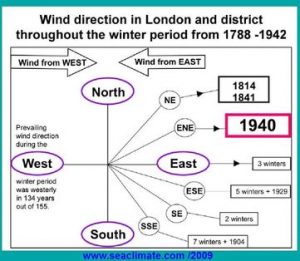 More wind: As the rate of evaporation over the North Sea has not been measured and recorded, it seems there is little chance to prove that more vapour moved upwards during autumn 1939 than usual. It can be proved that the direction of the inflow of wind had changed from the usually most prevailing SW winds, to winds from the N to E, predominantly from the East. At Kew Observatory (London) general wind direction recorded was north-easterly only three times during 155 winter years; i.e. in 1814, 1841 and 1940[6]. This continental wind could have significantly contributed to the following phenomena of 1939: ‘The Western Front rain’.

More rain: One of the most immediate indicators of evaporation is the excessive rain in an area stretching from Southern England to Saxony, Silesia and Switzerland. Southern Baltic Sea together with Poland and Northern Germany were clearly separated from the generally wet weather conditions only three to four hundred kilometres further south. A demonstration of the dominant weather situation occurred in late October, when a rain section (supplied from Libya) south of the line Middle Germany, Hungary and Romania was completely separated from the rain section at Hamburg – Southern Baltic[7]. 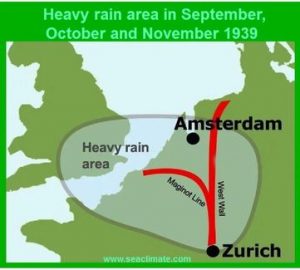 More cooling: Further, cooling observed from December 1939 onward can be linked to war activities in two ways. The most immediate effect, as has been explained (above), is the direct  result from any excessive evaporation process. The second (at least for the establishment of global conditions in the first war winter) is the deprivation of the Northern atmosphere of its usual amount of water masses, circulating the globe as humidity.

Rippling Effects in Northern Europe and Beyond

Next to the Atlantic Gulf Current, the North Sea (Baltic Sea is discussed in the next chapter) plays a key role in determining the winter weather conditions in Northern Europe. The reason is simple. As long as these seas are warm, they help sustain the supremacy of maritime weather conditions. If their heat capacity turns negative, their feature turns ‘continental’, giving high air pressure bodies an easy opportunity to reign, i.e. to come with cold and dry air. Once that happens, access of warm Atlantic air is severely hampered or even prevented from moving eastwards freely.

The less moist air is circulating the globe south of the Arctic, the more easily cold polar air can travel south. A good piece of evidence is the record lack of rain in the USA from October – December 1939 followed by a colder than average January 1940, a long period of low water temperatures in the North Sea from October-March (see above) and the ‘sudden’ fall of air temperatures to record low in Northern Europe.

The graph above suggests that naval warfare is linked to rapid cooling. The climate system responds with negative feed backs to restore equilibrium. Following WWI, limited to the North Atlantic, the system overshot and the momentum continued upward into the 1930s. Following WWII, with both Pacific and Atlantic theaters, the climate feed backs show several peaks trying to offset the cooling, but the downward trend persisted until about 1975.

The Oceans Govern Climate. Man influences the ocean governor by means of an expanding fleet of motorized propeller-driven ships. Naval warfare in the two World Wars provides the most dramatic examples of the climate effects.

Neither I nor Dr. Bernaerts claim that shipping and naval activity are the only factors driving climate fluctuations. But it is disturbing that so much attention and money is spent on a bit player CO2, when a much more plausible human influence on climate is ignored and not investigated.